2017 was a highlight year for our Scheme and as Chairman I am honoured to present this Annual Report which demonstrates the continuing levels of excellence and transparency which WEEE Ireland has led on since 2005. The Report details the record levels of electrical and battery waste take-back ever achieved in Ireland. It demonstrates to our Members that their Producer responsibilities are supported in this country through a quality recycling and recovery system administered by an experienced CEO and management team.

Because the WEEE Ireland membership comprises the majority of the industry players in the Irish marketplace it is important that our voice remains representative and relevant on their behalf. Since I became Chairman I have striven to ensure that sector representation and the highest level of corporate governance underpin the oversight function of the Board of Directors. During 2017 some Directors came to the end of their tenure with WEEE Ireland, and new Directors were elected via due process. I personally thank Des McCormack, Joe Cunniam and Martin Byrne for their service, and welcome Richard Broderick, Fergus Johnston, Brian Flood and Johnny Dunne to the Board.

In 2017 the Minister for Communications, Climate Action and Environment granted to WEEE Ireland reapproval to continue operations for a further five-year term. The WEEE Ireland Board and management team have always committed to enacting all aspects of the Minister's approval through the best in class compliance ethos which has underpinned our Scheme's activity since 2005. The recognition of Ireland as a primary case study in the European Commission's WEEE Compliance Promotion exercise in 2017 demonstrates the result of our ethos and performance. This 2017 Annual Report shows how WEEE Ireland is going beyond compliance, surpassing WEEE and Battery recycling and recovery targets on behalf of its Members.

The challenges we face in 2018 include the reaction of the global commodities markets to unsustainable recovery practices in certain waste streams, particularly plastics; the uncertainty that Brexit brings to all economic operators in Ireland; and the increasing targets and achievements required of Schemes and Producers under the European Circular Economy package. These challenges pose both risk and opportunity for WEEE Ireland, but I have every confidence that our Scheme is well positioned to meet them, with a sustainable finance and operational framework already in place.

The zeitgeist in consumer sentiment to change behaviour in a positive way for our environment provides more opportunity for our Scheme to communicate the many ways in which people can recycle for free with WEEE Ireland. I look forward to seeing more of our communications across all media streams reminding us all that Small Things Matter in 2018. 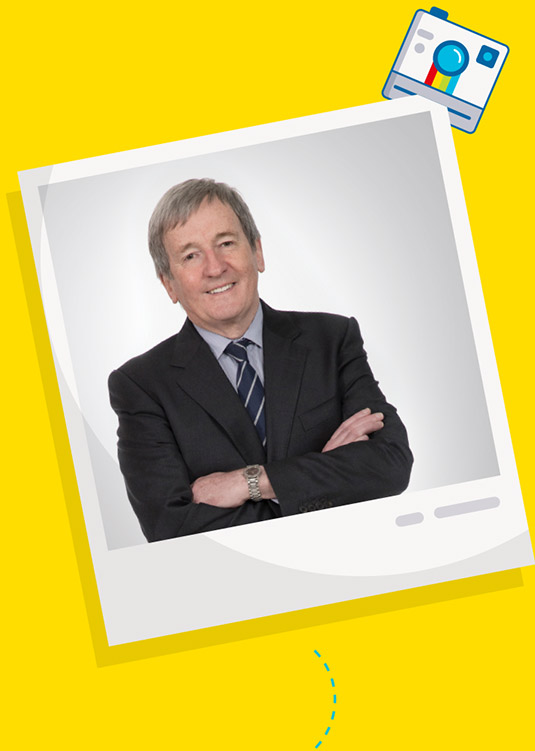 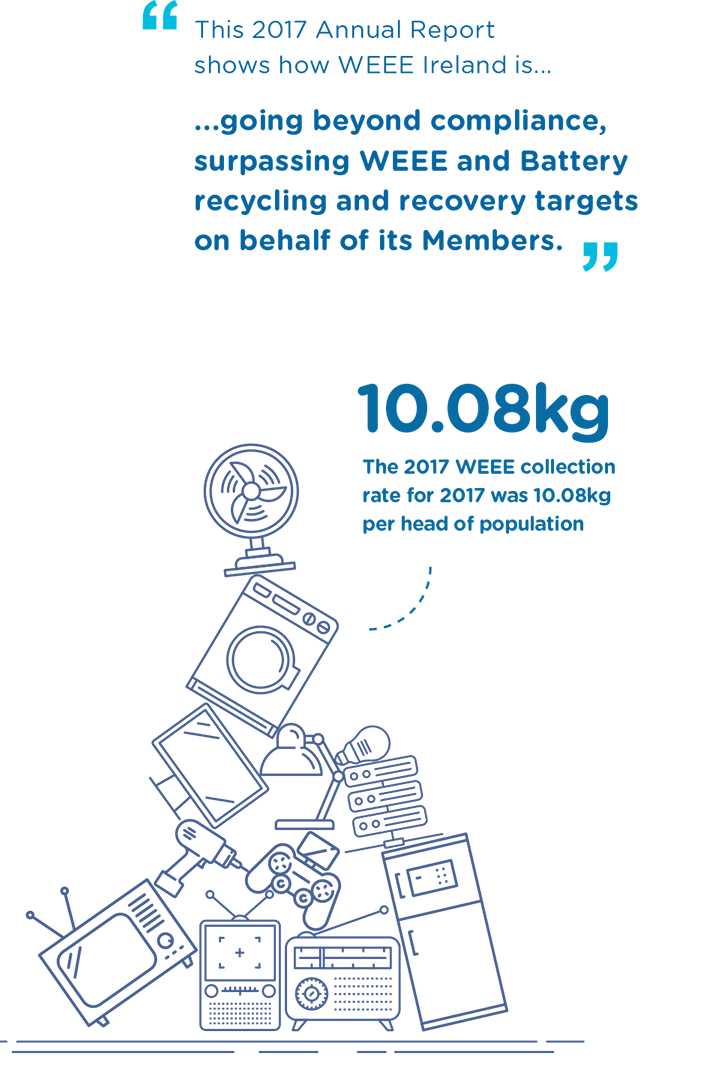 2017 was the best year to date in the history of the WEEE Ireland Compliance Scheme. We represented more of the industry than ever with 927 members ensuring continuing strength as the dominant scheme in the Irish market place overseen by a qualified and competent Board of Directors. We collected and recycled more tonnes of WEEE and waste batteries than ever before. Our Scheme directly contracts this activity to indigenous Irish operators giving our Members line of sight certainty through inhouse and third party WEEELABEX standard audits that we are carrying out quality environmental management on their behalf.

Ministerial Approval
In 2017 WEEE Ireland achieved a continuance of its approval granted by the Minister for Communications, Climate Action and Environment, as a Scheme for WEEE and Waste battery management on behalf of its Members. The approval includes requirements for a Producer Responsibility Initiative (PRI) to:

The WEEE Ireland scheme is well positioned to carry out all aspects of the Approval as these core activities have been an integral part of the Scheme development since 2005. During 2017 achievement of the new ISO 14001:2017 standard was another step in showing our Members the quality of the compliance service being provided with their certificate of WEEE Ireland Membership.

Best in Class
The ‘best in class’ approach that WEEE Ireland has consistently undertaken as a national Irish Scheme was further endorsed by an invitation in 2017 to present at the European Commission in Brussels as part of their WEEE Compliance Promotion exercise. Ireland was chosen as a case study example for best in class for a small country’s transposition of the WEEE Directive. As the Scheme with 75% market share for WEEE and 96% for Batteries, we were proud to share our achievements with our European colleagues.

Working alongside WEEE Europe in 2017 on our pan European service as well as providing expert input into national and international projects allows WEEE Ireland to support our multinational members on achieving European projects. We shared our outlook and experience with the WEEE Forum and Commissioner Karmenu Vella at the “15 years on” event in Malta last year; describing our financial, compliance and communication models to many interested parties. It was a personal honour to be also asked to deliver the after-dinner speech at this conference, where we reflected on the great achievements of the Weee Forum over the last 15 years. 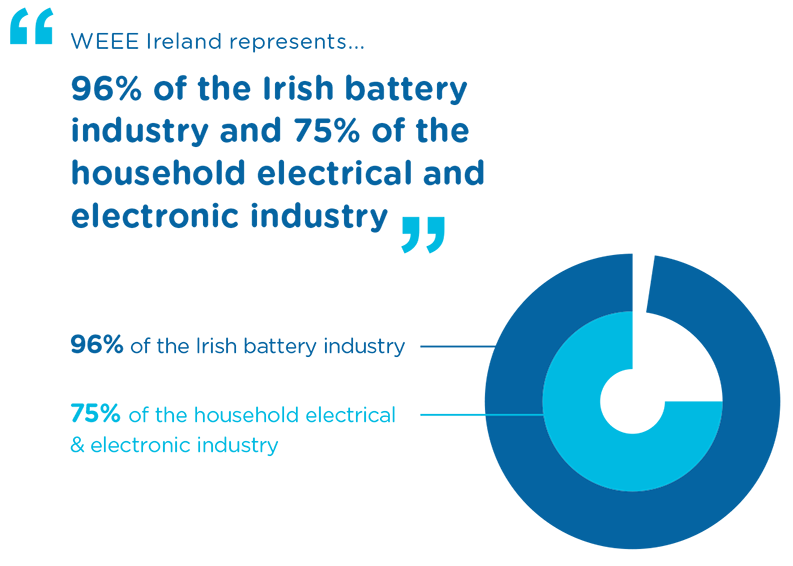 2018 Outlook
We will need all of our expertise and experience to meet the forthcoming environmental challenges that the new Circular Economy Package places on Producers and their Schemes, as well as the ever-increasing targets in recycling and recovery of WEEE and waste batteries. Pragmatic solutions to prevent, reuse and recover WEEE and waste batteries are required, with input from all stakeholders across the value chain.

WEEE Ireland’s 2018 ethos will focus on the application of standards while continuing to work toward a more level playing field, with support for enforcement authorities to deter non-compliant activity. Well documented issues that have arisen across global markets for waste plastics impact the cost of WEEE management. Quality indigenous solutions that add value to WEEE recovery output have mitigated this impact to some extent for WEEE Ireland Members. We continue to explore cost effective innovations in our recovery processes with our contracted operators. The work on the Recast of the Battery Directive has begun in the EU Commission and during 2018 a new Battery Steering Committee will support the Scheme in consultation on this key development.

Health and Safety of our team, operators and the public who participate in recycling activity continues to be a priority for the WEEE Ireland Scheme and during 2018 a significant risk management review will be undertaken to support this priority concern.

We named 2017 “The year of Small WEEE” where we set out to increase the collection of small waste appliances. In 2016 only 26% of small household appliances was collected for recycling however we have managed to increase that to 32% in 2017 and will continue with this theme throughout 2018. While we continue to provide financial and operational support to the Retail industry We’ll Take it Back progamme we recognized more advocacy was needed to collect more smaller waste devices. Our new campaigns remind everyone that “Small Things Matter” in our WEEE recycling world.

Thank you
I would like to thank my team for another year’s great performance in all areas of Collections, Treatment Compliance & Membership, Marketing and Finance. The combination of their efforts has delivered a cost effective WEEE and battery compliance on your behalf, delivering on all the conditions as set out in our letter of approval from the Minister. I would like to acknowledge the excellent work and guidance of my Board, especially our new Chairman who contributed significantly in his first year in offce. I would also like to acknowledge the many other stakeholders who have assisted WEEE Ireland in delivering one of Europe’s best WEEE and Battery compliance in 2017.

Thank you for being a member of WEEE Ireland. We are open for all WEEE and battery compliance services. Please contact us if you require any assistance with the new open scope and category listing coming into eect in 2019. We can assist you in both your B2C and B2B compliance.